How to make world maps?

World map - is an interactive list of levels which available to player(s) for play.

World map - is a key unit of game or episode!

World map also can be a hub-styled, I.e. world map will not be used. Instead of world map you will use the special level, which called as hub. In the hub player can enter into levels though warps.

To start make world map, first of all you need open the "File" -> "New" -> "World" menuitem. When you did it you will see the main editing interface which contains editing space where you will need to place objects.

If you wish to edit exist level, you can open the "File" -> "Open" menu and select necessary file in the explorer. You also can drag&drop file into editor's window directly to open them. You also can associate all supported by PGE Editor files with editor in the "Tools" -> "Application Settings" menu.

To make world map you need to place any items which you can found in the special item toolbox. The world map also settings of your episode.

The important items are levels and paths. Levels are entrances of your levels. Paths giving able to walk between levels or walk over world map. Don't forget, paths are not connectable images, there are simple squares which giving abel to walk between them when they near to each other.

Each world map should have: 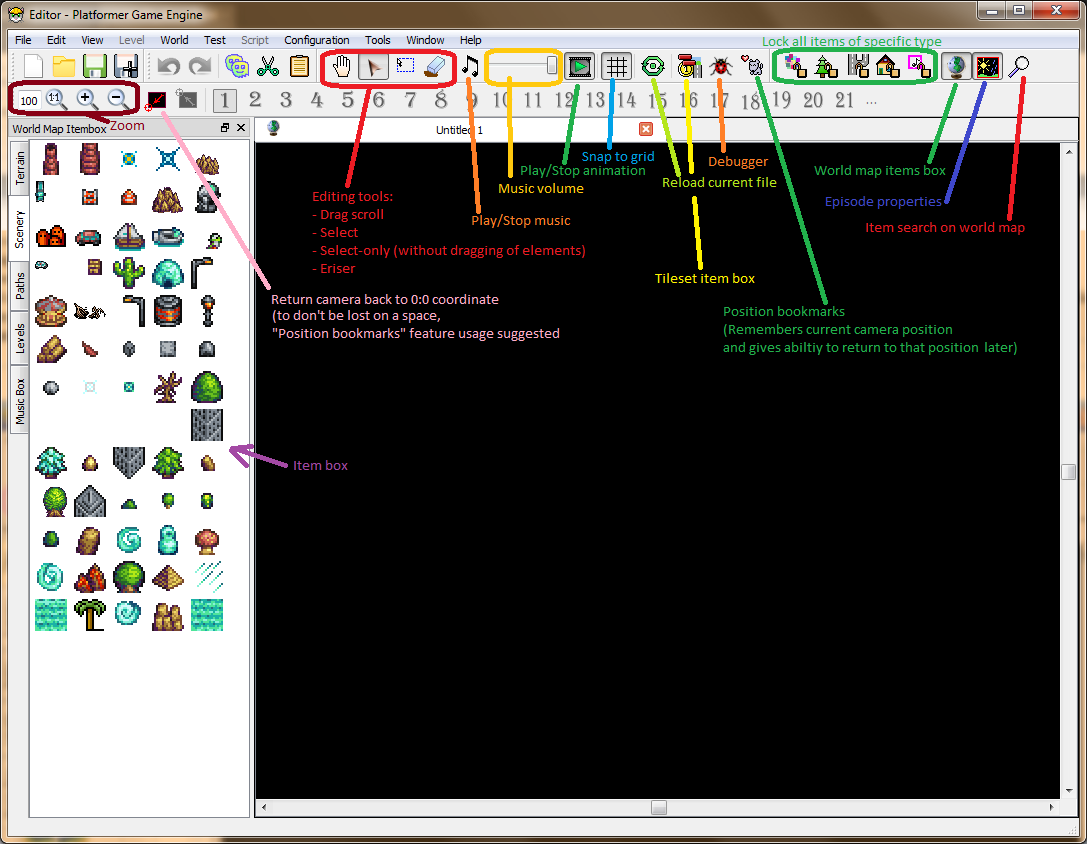 Terrain tiles - the main design units which are using for creation of a design of the world map. Terrain tiles aren't communicating with other items.

Sceneries - there are secondary design unit. Sceneries can be hidden when did opened a path which placed over them.

Paths - are allows to player move between level points and map locations. Usually paths are hidden and appearing when player pass the level which placed nearly to them.

Level entrances - there are a special units, which are allowing to enter into specified level or teleport player to other map coorditates. Levels are can have multiple entrances, but can have different warp points inside a level. Also level point is used as a game start point. If start point is not declared (world map has no level entrance point with "Game start" flag), player will start game at 0:0 coordinates.

Music Boxes - there are a special units which are switching a playing music when playable character stands on them.