How to make levels?

Levels - are a total space available to the player(s) during the course of completing a discrete objective.


To start make levels, first of all you need open the "File" -> "New" -> "Level" menuitem. When you did it you will see the main editing interface which contains editing space where you will need to place objects.


If you wish to edit exist level, you can open the "File" -> "Open" menu and select necessary file in the explorer. You also can drag&drop file into editor's window directly to open them. You also can associate all supported by PGE Editor files with editor in the "Tools" -> "Application Settings" menu.


To make level you need to place any items which you can found in the special item toolbox. Also you have able to set section size, define background image and background music, you will need to open the section settings item box where you have able to use any properties of current section.


Each level should have: 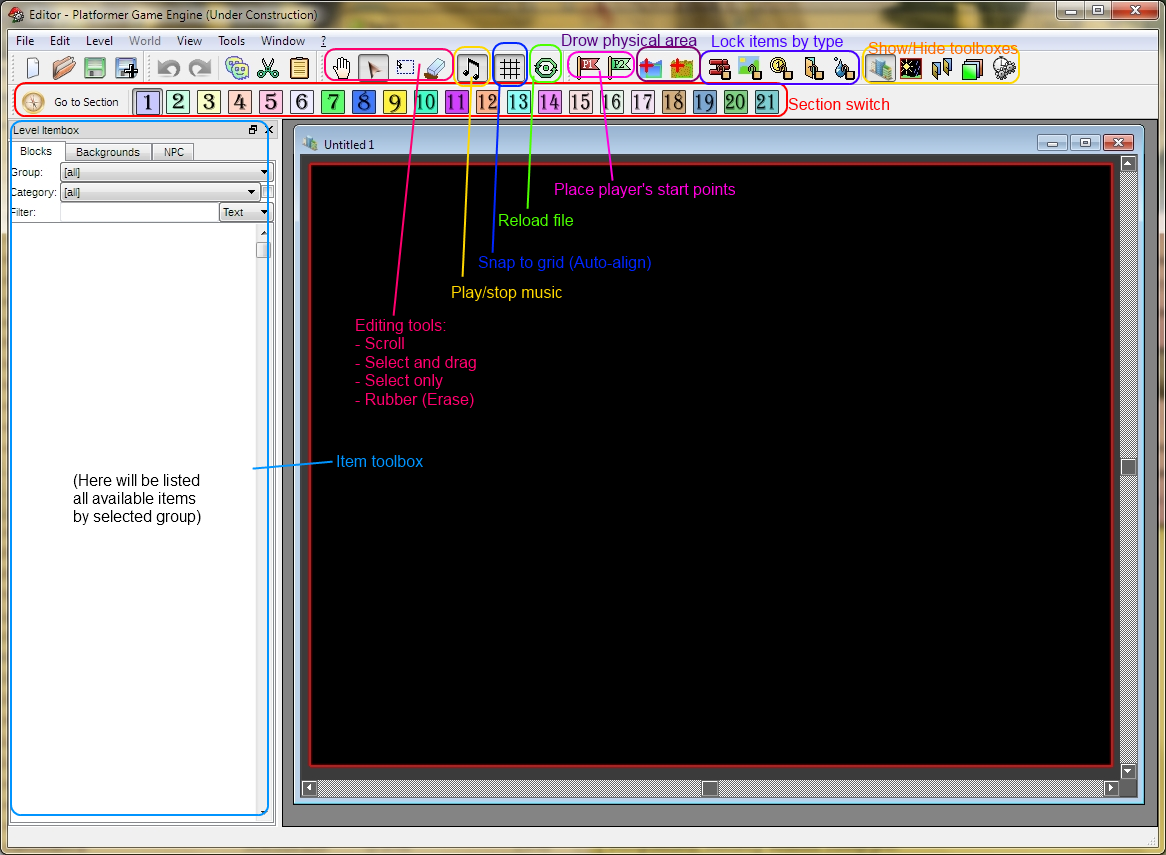 The main level unis is a section. Section - is a separated sub-area of level which have it's own settigs: music, background, physics, etc. Player can move between sections via special points - warps. All sections placed in a united space, and you can see many sections in one space, but you have able set settings for one section at same time.

Items - are a main content of each level. To make level you should place them to make universe of your level.


Click to the name of item type to learn more about them:


Blocks - are a solid objects which are tiles with its shape and size. The main construction material of which level consists. The majority of blocks interacts from players on whom it can stand about which the player can hit which can be a limiting wall. There are blocks which hurts to the game character on touch, and some are may to kill it instantly, and also able to destroy other objects which have touched them. There are special blocks with own algorithm of interaction with the player. For example: switch, switching wall, what changing his state frol lock to unlock and back; switches between player characters and character limit blocks, what allows walk throught them only for one of characters, for other characters theese blocks working as normal, etc. As there is a special type of blocks which can have any size. This is a Sizable blocks.


Background objects - are a sceneries. But some BGO can have special features: platform movement paths, will define movement paths for moting "platforms", reverser, what will revert platform's speed back. Some BGO allows to clibmb on them. BGO can be background and foreground. Foreground BGO placing over all other level items.

Non-playable characters - are a main game unit, what building the game process: theese is a enemies, friends, items, power-ups, sceneries, etc. Each NPC have his algorithm, and can be programmed.

Layers - are a groups of items which can be used for fast access to them by special events.

Events - are a special data of level which can dinamicly define and change the game process options. For example: section settings, hide/show objects on target layers, move objects on layer, made scrolling of section, etc.